Letter From Greece: A Crisis Atop a Crisis

Migrants in Greece wait at the Macedonian border for permission to cross. Limits by Macedonia on the number of migrants allowed to enter are creating a bottleneck, straining resources in Greece. (SAKIS MITROLIDIS/AFP/Getty Images)

In three visits to Greece in the past two years, I have found the country mired in various crises, each with its own cause but all certainly intertwined.

I visited Athens in late 2014, when the conservative government led by Prime Minister Antonis Samaras was struggling to remain in power and the left-wing Syriza party was campaigning on a promise to renegotiate Greece's sovereign debt. Shopkeepers in the touristy Plaka neighborhood were worried that a Syriza government could create additional uncertainty that would damage the tourism industry, the only sector of the Greek economy that was still functioning at full speed.

The landscape of Athens was certainly ominous, with heavily armed police officers patrolling the city and high fences protecting the Greek Parliament building. Protests and strikes were widespread, and Samaras' coalition of center-right and center-left allies was quickly depleting its political capital. Years of crisis and mismanagement had eroded the popularity of the country's traditional parties, and a victory by Syriza seemed certain.

My second visit to Athens took place during the dramatic days of July 2015. Syriza had won the general election six months earlier and was clashing with the country's creditors over the terms of a new bailout program. Greece was close to leaving the eurozone, capital controls had been introduced, and Prime Minister Alexis Tsipras had decided to put the future of the bailout to a popular vote.

Rumors and conspiracy theories swept the city. A new hypothesis about the future of the country emerged every minute. The media focused on the negotiations with Brussels and the internal dynamics of the Greek government, but most of the stories were slanted to match the political orientation of the outlet. Everybody seemed to have a poll on how the referendum would turn out, and everybody had "insider information" on what Tsipras would do after the vote.

Referendum week was tough for the Greeks. People felt something terrible was about to happen, even if they weren't sure what the new calamity would look like. There were queues at every ATM as people withdrew their daily allowance of cash as a safeguard against uncertain days to come. Demonstrations for and against austerity were held as the referendum divided those who thought a default would only make things worse and those who had completely lost hope for the future.

My third visit to Greece came in late February, and once again I found the country in crisis. The bailout is still a big issue, and the government in Athens is still waiting for creditors to make an assessment of the program and decide whether to release the next tranche of funds. Austerity measures are as controversial as ever, with farmers blocking roads to protest plans to remove subsidies for the agricultural sector and workers protesting ever-rising taxes. But things seem to be relatively stable. Although the prospect of a Grexit is still very real, nobody expects the country to leave the eurozone immediately. For many Greeks, resignation over the future has replaced angst. Syriza lacks the popularity or the initiative to be rebellious, and Tsipras has linked his political future to the evolution of the bailout program.

If the economic crisis is relegated to a second place, it is because a more pressing issue has replaced it at the top of the list of people's worries. With countries along the Balkan migration route closing their borders or introducing migrant quotas, Greece could become a dead end for asylum seekers entering the country from Turkey. At the moment, the key chokepoint is Greece's border with Macedonia, where a growing number of migrants is stranded. Asylum seekers could eventually turn to Albania or Bulgaria as they try to reach northern Europe, even if those routes are longer and through more rugged territory. But if those countries close their borders, Greece will be isolated.

The situation is particularly hard in Greece's eastern islands, the main entry point for asylum seekers. Local governments lack the resources to host the migrants and worry that the crisis could hurt tourism. Most asylum seekers are taken to mainland Greece, where they start their long journey to northern Europe. At this point, Athenians in the city's central neighborhoods don't see migrants, who are primarily hosted in the areas around the Piraeus port. But tougher border controls in Macedonia and other countries could change this situation and create a volatile environment in Greece.

As one Greek colleague told me, people are worried that an incident like the robberies and sexual assaults in Cologne on New Year's Eve, which were blamed on groups of asylum seekers in Germany, could trigger violence against migrants in Greece. In the past few months, there have been small anti-migration protests and sporadic acts of sabotage against migrant reception centers, but the situation is mostly calm. Migrants don't want to stay in Greece, but as the Balkan route becomes less accessible, the probability of clashes between local residents and migrants increases. Ethnic-related violence could be the last straw for a country plagued with recession and record unemployment.

The Greek government is sending northern Europe the message that it wants to remain in the Schengen Agreement. New migrant reception centers have opened in Greece, and the Greek military has said it will cooperate with NATO efforts to disrupt human trafficking organizations. But Greece is suspicious of its historic rival, Turkey, and most people in Athens don't think Ankara is truly committed to preventing asylum seekers from entering the European Union.

To make things worse, Greece has lingering disputes with some of the key actors in the refugee crisis. Athens has territorial disputes with Ankara over some of the parts of the Aegean Sea currently sailed by migrants, which will limit the effectiveness of the NATO operations. The name dispute between Greece and Macedonia is far from solved, and Skopje is more interested in coordinating its actions with Vienna than with Athens. To a lesser extent, Greece also has unsolved border disputes with Albania in the Ionian Sea. The refugee crisis is therefore making Greece dependent on the cooperation of past and present rivals, which makes compromise difficult. The European Union's ongoing process of political fragmentation will also reduce the possibility of a global approach to the crisis. 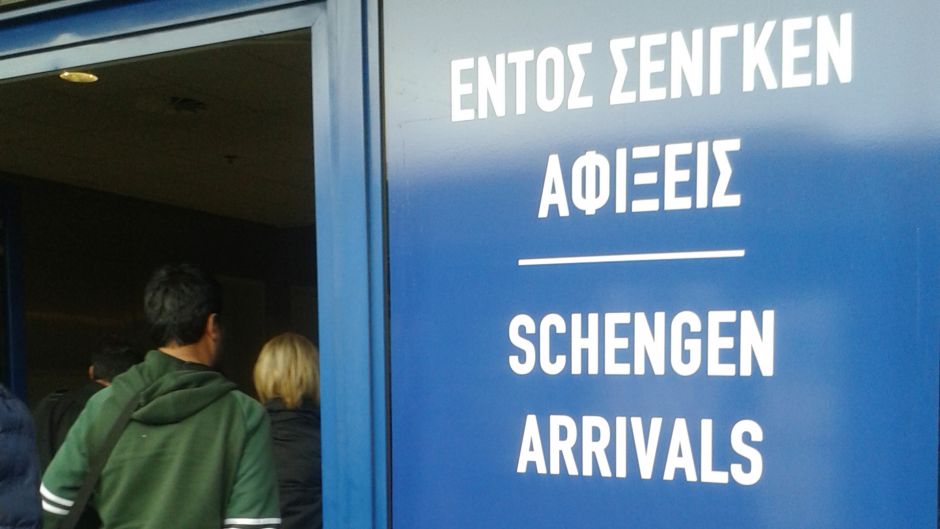 Passengers arrive at the Schengen area at the Athens airport. The EU debate over Greece's membership in Schengen will have repercussions on how its economic and migrant crises play out. (Adriano Bosoni/Stratfor)

The migration crisis is also having political repercussions in Greece. In May, the European Union will decide whether Greece is failing to protect its borders. A negative report could lead to the country's suspension from the Schengen area. The debate is not really about Greece — central European governments want to use the situation there as a justification for the imposition of long-term border controls with one another. But just as EU members debated whether to keep Greece in the eurozone in 2015, they will discuss the country's membership in Schengen this year.

Some adversaries from last year's bailout fight are on the same side of the migrant issue now. The German government had tried for months to treat the bailout program and the refugee crisis as separate issues. But Berlin is coming to terms with the idea that Athens should receive the next tranche of the aid program and that Greece should be kept in Schengen. Greece's expulsion from the passport-free zone would dramatically decrease parliamentary and popular support in Greece for the bailout program and lead to Tsipras' ouster. From Berlin's point of view, a chaotic but cooperative Greece is a better counterpart than a rebellious and ungovernable country.

Athens is hoping that German Chancellor Angela Merkel keeps her job, too. If the most conservative factions of Germany's ruling Christian Democratic Union (CDU) party had been in charge last year, Greece likely would not be in the eurozone today. If Merkel capitulates to those forces — a possibility if her party performs poorly in upcoming regional elections — Greece's membership in Schengen and the continuation of the bailout program will be in jeopardy. The Greek government is also counting on Italian support. Rome knows that Italy could be next in line when it comes to blaming countries for failing to protect their borders, so it's in Italy's interest to help Greece avoid suspension from Schengen.

There are no short-term solutions to the refugee crisis, and people will continue to try to enter the European Union even if governments build more fences and enhance their sea patrols. The main threat for Greece is that the migration crisis could exacerbate the country's underlying problems and lead to a new phase of political and economic uncertainty. Even with a looming wave of immigrants headed for their country's shores, the lingering topic of debate among many Greeks is still how their country should move forward on the economic crisis.

I shared my most recent flight to Athens with a group of Greek businessmen returning from an international conference in Barcelona. Most of them were in their early 40s and were born before Greece was in the European Union. They certainly remember the transition from the drachma to the euro at the turn of the century and see Greece's membership in the currency union as a key element of its membership in the club of Western nations. One of them told me he couldn't believe that some of his compatriots actually want to return to the drachma. For him, leaving the eurozone and the Schengen Agreement would only turn Greece into a poor, isolated country on the periphery of Europe. Without the European Union, he said, Greece would be just "another unstable Balkan country."

I got a different answer from a taxi driver, who explained that he works 16 hours a day only to have 60 percent of his income taken by the state in the form of taxes. He doesn't travel abroad simply because he cannot afford it, so it makes little difference to him whether Greece is a member of Schengen. As for currency, he would prefer to have "Greek money" instead of "Merkel money" in his pocket.

Most Greeks still support the euro, but the common currency is particularly unpopular among youths, the demographic hit hardest by the crisis. Young Greeks who have emigrated still appreciate the possibility of studying and working in other EU countries. But many of those who have been left behind don't see the point of membership in a currency union that does little for them. The economic and migration crises could make an explosive combination. If the Greeks feel that they have been abandoned by their European peers and betrayed by their neighbors, severe instability could follow. In a way, it was "referendum week" all over again for me. Greece is still divided between those who think they still have a lot to lose and those who think they've already lost everything.